Jim started in the insurance business in 1985 as a producer. In 1992 he formed Independent Insurance Group, Inc., an all-lines agency licensed in many states. The agency has 11 full-time employees.

An active member of Independent Insurance Agents of North Carolina for many years, Jim served on the board for six years as director of District 6. In 2012, he was elected to the executive committee and has served as Secretary, Treasurer and Chairman-Elect. In October 2015, he was elected to the executive committee as Chairman. And today, he serves on the Governance and Leadership Committee for the association. IIANC is a statewide trade association representing more than 1,000 independent insurance agencies in North Carolina, with more than 10,000 employees, who work to protect North Carolinians. Independent agents represent more than one insurance company. This is important because it means an independent agent can offer you a wide choice of insurance products to help protect your home, your family and your business.

Jim is a former Region V Vice President of the National Association of Health Underwriters (NAHU), a past president of the North Carolina chapter of NAHU and founding president of the local Fayetteville association (now known as the Sandhills Association of Health Underwriters). NAHU is an organization dedicated to serving the public by promoting the activities and ethical conduct of insurance professionals through communication, education and legislative representation. While serving in his NAHU capacity, Jim received recognition as NCAHU Member of The Year in 1997, NAHU’s Distinguished Service Award in 2002. In 2003 he received NCAHU’s highest award, the Fredrick W. Joyner Distinguished Service Award. He has been an Honor Council Member and a Lifetime Member of the Leading Producer Round Table since 1995.

Jim completed his studies in April 2001 to earn his MBA from Ashford University. Debra joined the agency in 1996 and is the secretary/treasurer of the corporation. She is a graduate of Belmont Abbey College with a degree in business administration. She is also a licensed notary public. Jeff joined the agency full time in July 1999. He became a licensed agent after serving in the United States Air Force for seven years. During his time in the Air Force, Jeff was an electrician and an environmentalist on C-130E aircraft, as well as a flying crew chief. He was deployed to Saudi Arabia in support of Operation Southern Watch on three occasions and was in Germany twice to support the peacekeeping mission in Bosnia. Jeff is a former president of the Greater Spring Lake Chamber of Commerce and an alumnus of the Pope Air Force Base honorary commander program, having served with the 43d Medical Group from 2003 to 2005. He became involved in the Independent Insurance Agents of North Carolina (IIANC) after attending his first Young Agents Conference in 2005, and he served as political action committee chairperson of the Young Agents board of directors from 2008 to 2010. Jeff is currently serving on the legislative committee for IIANC. He also served as the chief volunteer officer of the Boys & Girls Clubs of Cumberland County board of directors from 2009 to 2010 and as the chair of the Pope Special Activities Committee to facilitate relations between the community and the airmen stationed at Pope Field in Fayetteville from 2015 to 2018. Jeff’s current community activities include serving on the membership committee of the Home Builders Association of Fayetteville. Tracy joined the business in March 2005. She is licensed to sell life, health, Medicare Supplement and long-term care products, helping both individuals and employers receive these types of insurance coverage. Tracy has also completed the necessary training to assist individuals with applying for coverage through the Health Insurance Marketplace. A graduate of the University of North Carolina at Chapel Hill School of Journalism and Mass Communication, Tracy has served as the publisher of National Health Care Buyer resource guide, media relations chair of the North Carolina Association of Health Underwriters, communications chairperson for the local Sandhills association and was the 2006-07 president of the Sandhills association. She served as the chairperson of the annual “A Garden Party” planning committee to raise funds for the Boys & Girls Clubs of Cumberland County from 2010 to 2013 and from 2015 to 2017. Tracy is also the former vice president of marketing for Fayetteville’s Community Concerts, a non-profit organization whose desire is to bring the finest in top-notch entertainment to Fayetteville. In 2017, she was elected to the position of Air Mobility Command Civic Leader for Pope Army Airfield to increase understanding and cooperation between the civilian community and the Air Force. She is a member of the National Association of Health Underwriters and the membership chair of the Fayetteville Area Society of Human Resource Management. Tracy is also a notary public. Cheri joined IIG, Inc., in 2012, bringing more than 20 years of experience as a commercial insurance agent. She works with businesses throughout North Carolina to secure general liability, workers compensation, property, auto, umbrella and other specialty coverages. Her experience and special training in assessing the total cost of risk is beneficial to the businesses she advises. A resident of Wilmington, NC, Cheri holds a bachelor of science in business and psychology from the University of North Carolina at Charlotte. She also earned the distinguished accreditations of Certified Insurance Counselor (CIC) and Accredited Adviser in Insurance (AAI), as well as the Certified Risk Management (CRM) designation. Becky joined IIG in April 2015 as the receptionist, but quickly moved to customer service in IIG’s personal lines department. In August 2017, she was promoted to personal lines manager. She holds a bachelor of arts degree from Trinity International University and is licensed in property & casualty insurance. Becky stands at the ready to assist our home and auto clients.

Vicki joined the agency in July 2018. She works in our life and health division to provide customer service to both employer groups and individuals. Vicki is no stranger to customer service. She has more than 15 years of experience, working with clients in the hospitality and construction industries in the past. Vicki completed her licensing requirements for both life and health insurance in April 2019. Kelli joined the agency in September 2014 and earned her property & casualty license in May 2015. After working in the personal lines division, she moved to the commercial lines department in August 2015. She provides excellent customer care to IIG’s commercial clients whose business names begin with the letters A through J. 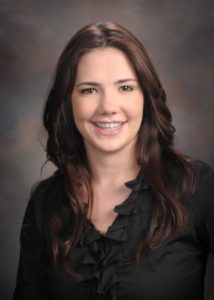 April has been with IIG since 2007 – well, almost! She did leave for a short stint in 2017 after the birth of her second child, but she just couldn’t stay away. April returned on a part-time basis to assist in the personal lines department, working with our home and auto clients to secure coverage with our many carriers. She is licensed to sell property & casualty insurance. Christy joined IIG in September 2015 and is the first person to greet you when you call or walk in to our office. She earned her property & casualty insurance license in August 2016 and assists the commercial and personal lines divisions with payments, policy issuance, certificates of insurance, evidences of insurability and other areas of customer service.